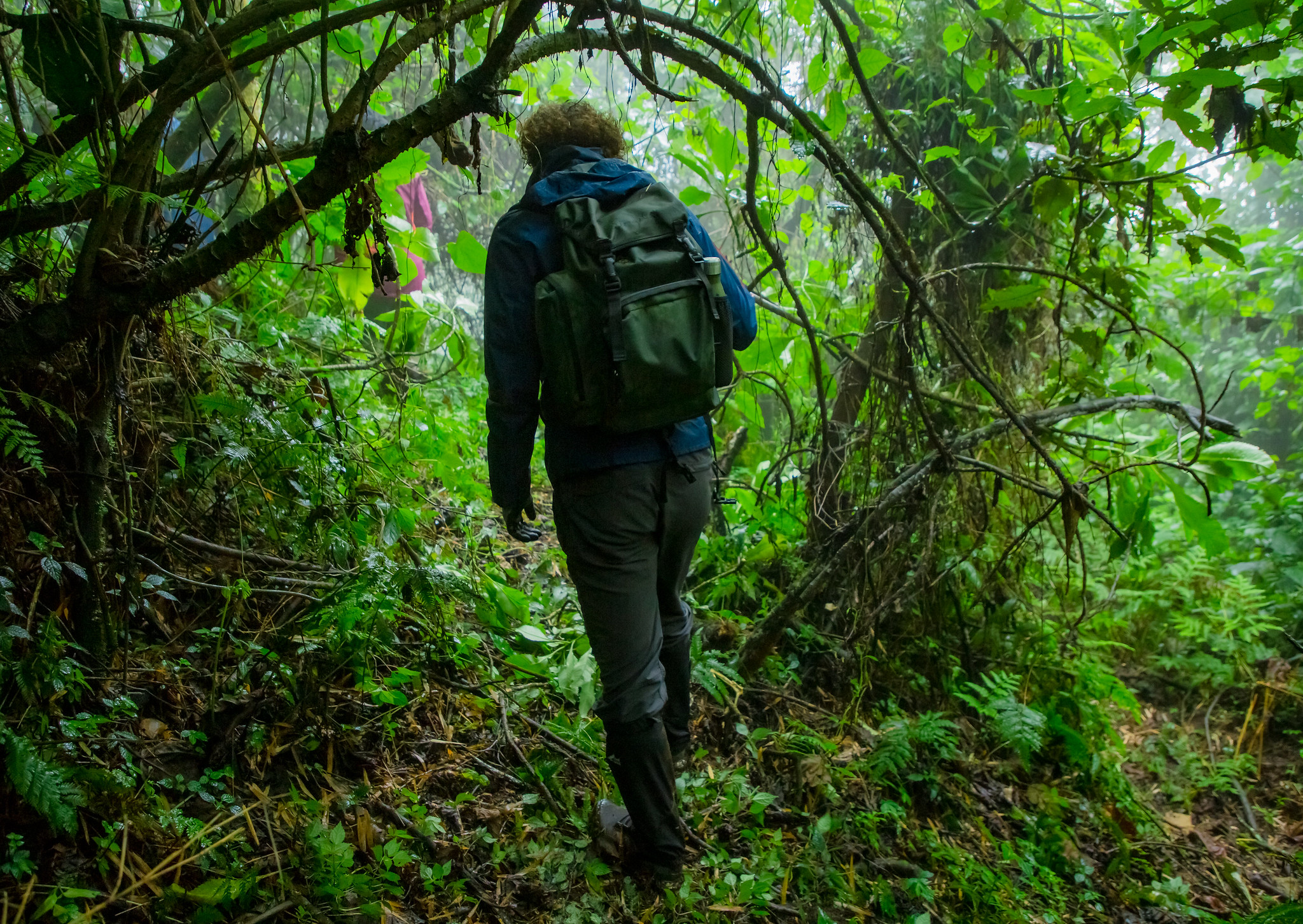 The parks first became famous as American Zoologist Dian Fossey’s research center, the base from which she spearheaded the global conservation campaign that saved Mountain Gorillas from extinction. Today it is associated with “Kwita Iziina” a naming ceremony for baby gorillas that is one of East Africa’s biggest tourist events.

VNP is home to Mountain Gorilla, Golden Monkeys, Spotted Hyena, Buffalo, Elephant, Black-fronted Duiker, and Bushbuck. Gorilla tracking is the park’s biggest attraction, but it is also a must-stop for birders; with over 178 recorded bird species, including 29 endemics to the Albertine Rift and the Virungas, VNP is a leading destination for birders.

Tracking gorillas can be quite tiring and challenging. You might have to hike for hours before you find them. The altitude also contributes greatly to the strain of the hike because the trekking happens at an altitude range of 8000 to 10,000ft. It is not high enough for altitude sickness, but it is high enough to get you out of breath quite fast.

Volcanoes National Park is most famed for having Mountain Gorilla. There are ten groups of habituated gorillas in Volcanoes National Park. They usually climb higher up the mountain in the dry season and descend in the wet season. However, there are plenty of other animals too, including the Golden Monkey, Spotted Hyena, Buffalo, Elephant, Black-fronted Duiker, and Bushbuck.

The mountain gorillas, the world’s most endangered ape, is found only in small portions of protected afro Montane forests in northwest Rwanda, southwest Uganda, and eastern DR Congo. The mountain gorilla is one of many species unique to these forests. The forests are also home to many wonderful birds, primates, large mammals, reptiles, insects, plants and also ensure continued water and medical plant resources for the local communities.

Gorilla tracking is the park’s biggest attraction, but it is also a must-stop for birders; with over 178 recorded bird species, including 29 endemics to the Albertine Rift and the Virungas, VNP is a leading destination for birders.

Tourists looking for a short gorilla tracking trip prefer Rwanda because it’s nearer to the airport. The park is accessible by public transport from the airport and Kigali, and the drive is only 2 hours long. Accommodation facilities come in both luxury and mid-range, in addition to camping facilities.

ACTIVITIES IN THE PARK

Volcanoes National Park is a top safari destination with a growing number of travelers coming into Rwanda to visit Mountain Gorillas in the wild. Other activities in the park are Golden Monkey tracking, hike to the Dian Fossey grave site, tour to the twin lakes of Burera & Ruhondo, Mount Karisimbi volcano hike, Bisoke volcano hike, cave tours in Musanze, bird watching, and community ecotourism in Iby’Iwacu cultural village.

Gorilla Tracking: Hidden high among the forested volcanoes of East Africa, the mountain gorilla was unknown to science until 1902, when two were first encountered by a German explorer and promptly killed. It set the tone for the relationship.

For much of the time since, due to deforestation and poaching, it has seemed that the mountain gorilla was swiftly destined to be lost to the world again. Not long after the species’ greatest champion, the American zoologist Dian Fossey was killed in Rwanda in 1985-there were fewer than 300 of the giant primates left in the wild.

Golden monkeys in Rwanda live in the bamboo vegetation towards the base of the volcanoes and habituation has helped them to overcome their initial shyness to accept their daily visit by researchers and tourists.

Iby’Iwacu Cultural Village gives you a rare chance to meet local people, in their environment, with a taste of our culture and traditions. Be genuinely welcomed by the community as a special visitor while they proudly present to you aspects of their traditions and beliefs. The only way to get to know people is by getting close and interacting with local people, and taking part in their daily activities and most of all with them.

Mount Karisimbi Hike: Climbing Mt Karisimbi is a strenuous yet very rewarding 2 days hike. The climb starts early in the morning taking 6 hours and involves navigating through the Bisoke side before reaching the first stopping place at an altitude of 3,700 metres for overnight camping before finishing off the journey the next day.

The name Karisimbi is derived from the word ‘amasimbi’ in Kinyarwanda which means “white shell”, referring to the white-capped summit which is often seen on top of this volcano. It is flanked by Mikeno to the north, Bisoke to the east, and Nyiragongo to the west, on the other side of the Rift Valley. The mountain is situated in Volcanoes national park, popularly known for the mountain gorillas.

A hike to Karisimbi’s summit is not an ordinary one, but also affords sights of several bird varieties, primates like monkeys and Gorillas since the volcano lies in the primates’ park of Parc National des Volcans (Volcanoes national park). It is also known for its exotic plants in its four belts of vegetation, from the dense forest at its base to the barren volcanic core at the summit.

Mountain Bisoke Hike: The mountain Bisoke adventure is one of the most memorable activities in Rwanda. The top of this Volcano has a spectacular crater lake. It is simply a 6 hours hike including the 2 hours descending down to the starting point. Experienced hikers can get to the top of this mountain in a matter of 3 hours or even less and return to the base in about an hour.

Musanze Caves: A cave is a natural underground space large enough for a human to enter. While visiting Volcanoes national park, have the chance to tour the Musanze Caves two kilometers long underneath that were recently unveiled to be visited by tourists in 2013 by the Rwanda Development Board together with the Rwanda Defense Forces.

The caves can be sited north of the country in Musanze District, the site has had a major facelift with the establishment of tourist walkways, trails, and stairs that take you to the dark interior of the caves that illustrates a picture of a house with several rooms and corridors. The floor is paved and there are some stairs to ease movements.